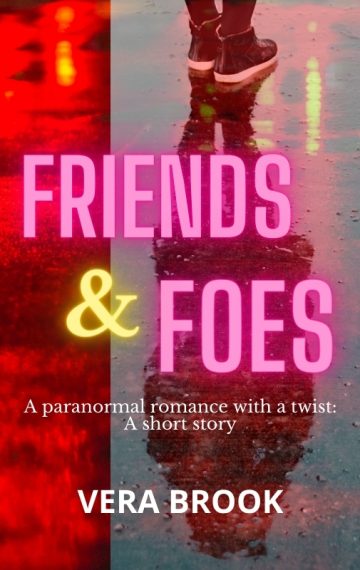 It was Happy Hour at The Tavern, and Lena sipped her second margarita, the stress of not thinking about Kyle slowly lifting from her body. Steph had snatched a corner booth for them and rightfully claimed the middle seat. Lena sat on the edge, only half listening to Maggie who sat across the table.

“…But why should I even bother, you know? The first sign of trouble, and he’ll just pick a fight and take off again. It’s what he does.” Maggie used her straw to pierce a mint leaf in her mojito. “And what am I supposed to do, beg him to stay? We’re not that desperate.” She pointedly looked at Lena. “Right?”

“Um…” Lena said, dodging the bait. Her buzz was halfway to bliss, and she wanted to hold onto it. She pressed her lips to the rim of her glass and let the salt crystals melt on her tongue. Simple pleasures would get her through it. Another week or two, and she’d be over Kyle for good.

“Oh my god.” Steph’s face hardened, her gaze fixed on a point past Lena’s shoulder.

Lena should not have turned. She knew it even as her neck commenced the rotation.

Kyle stood less than three yards away, wearing jeans and a black shirt, looking straight at her. Bar patrons pushed past him and servers shot him dirty looks for blocking the aisle. But he didn’t budge.

It took Lena a moment to notice the single red rose in his hand.

It was the rose that did it. Her buzz fizzled out, taking all her hard-earned calm with it. She was on her feet and in his face, her heart pounding. “You have a nerve.” Her voice crackled with anger. “I told you I never want to see you again.”

She had an impulse to rake her fingernails down his chest, to slice flesh and draw blood. But it wouldn’t work: her nails were too short. Besides, distance was best.

“Can I talk to you outside?” Kyle took a step closer, his forehead creased with remorse. “I know I screwed up but… Please, Lena. I just want to talk.”

Lena glared at him. Forget it. It was over. She’d give herself one last moment to look at him, and then she was going back to the booth, back to Steph and Maggie—two people who actually cared about her and were there when she needed them—and she’d order as many margaritas as it took to obliterate Kyle from her mind.

Yes. That’s exactly what she was going to do.

Instead, she grabbed her purse from the booth and headed outside, hyperaware of Kyle following a step behind her.

As Lena pushed open the heavy door and stepped onto the sidewalk, a drizzle of warm rain brushed her face and bare arms. Night had fallen, the sky like dark velvet overhead, and the wet sidewalks glowing in the street lights. She strode away from the Tavern and spun to Kyle.

He squinted up into the rain. “It’s going to pour. Let me give you a ride home. I promise I’ll behave.” He offered her the rose, smiling.

That smile, the red rose, the rain like a caress on her skin…

A familiar tension gripped Lena—a rip threatening to crack her wide open if she as much as blinked.

Teeth clenched, she dug her toes into the thin soles of her flats, willing herself to resist, to keep it together, to stay put.

But it didn’t work.

A burst of agony as a violent force gripped her and tore her apart—her body suddenly made of air, a hologram with no substance, stuck in place—and the street spun around her, the lights streaking like melted wax, before snapping back into place.

A woman accepted the rose. Kyle slipped his arm around her shoulders. They got into a car together and drove away.

That woman was Lena.

She had split herself again.

If there was one person Lena could trust even less than Kyle, it was herself around him.

The rain picked up, no longer gentle, and she focused on it, her beacon back to a solid form.

The raindrops hitting her face, the soaked black dress clinging to her skin, the purse in her fingers, her own furious heartbeat. The sensations were barely there, like sounds coming from a distance. But slowly, they got stronger.

The effort was exhausting, like trying to catch wisps of fog and weave them together by sheer will. But she kept at it, gathering back the pieces and mending the cracks.

Until she stood on the sidewalk again, soaked through, as more rain pounded down on her.

Her first impulse was to flee. Her friends Maggie and Steph were still at the Tavern. They knew nothing about her weird affliction. She could run back inside, drown her humiliation in more tequila, and come up with an excuse to crash with one of them for the night.

Never go home and confront Kyle and her other self at all.

Let them do what they wanted, and pretend it didn’t bother her. After all, she wasn’t doing anything—it was the other Lena, the copy, the clone. She wasn’t real, so what did it matter?

Except… it did matter, and she was real enough.

Any time a temptation popped up, all Lena’s stupid, selfish, reckless impulses fused together and fought to break from her control.

He was with her clone right now.

Served Lena right. If she’d been stronger and stayed in the booth with her friends, of one mind instead of wavering, none of this would’ve happened.

At least her clone never stuck around for long—a few hours at most—before she vanished.

Still, Lena was sick of hiding.

With rain in her eyes, she ran the five blocks to her apartment, splashing through puddles that reflected the street lights. Everything doubled and inverted. Like she and her clone.

By the time she dashed inside her staircase, her wet dress and underwear clung to her like second, icy skin, and her flats had all but disintegrated on her feet.

The staircase zigzagged upwards. Lena kicked off her soaked flats and tossed them in the trash can under the mailboxes. Then ran barefoot up the cement steps.

Her apartment was on the fifth floor, the last door on the left. She marched down the hallway, key in hand. But a sound made her freeze at the door.

A man and a woman panting in rhythm.

It took her a moment to realize the woman’s voice was her own.

Lena gripped the doorknob, about to barge in and tear the lovers apart. But just then, Kyle moaned in pleasure.

It was like a punch in the gut, her whole body smarting from the betrayal.

She knew that moan. It was her moan. Only she was capable of drawing it from Kyle’s throat.

Her clone would not take that away. Enough was enough.

Lena stepped inside and slammed the door shut behind her. A courtesy notice of her arrival. Plus, she preferred not to walk on people having sex.

Kyle and her clone were in the living room, the sofa pillows in a telltale disarray. He was zipping up his jeans, still shirtless. She was straightening down her dress. The rose lay on the floor, next to perfectly dry flats.

Lena locked gaze with her clone. The first time ever.

It was odd—like looking at herself in the mirror, but not quite. At the moment, the clone’s cheeks were very pink and sweat glistened on her collarbone.

So this is how I look after sex, Lena thought. Huh.

“That’s right,” Lena said, surprised at her own calm.

From the corner of her eye, she tracked Kyle’s every movement.

Suddenly, it hit her. Why should they fight? Surely, they could both get what they wanted.

They just needed to set some rules.

“Wait…” Kyle just stood there, his gaze shifting back and forth between them. “What… Who…”

The look on his face was payback enough. Lena peeled his black shirt off a chair and tossed it to him. “Get out of my apartment, Kyle. I need to talk to—her.”

Kyle’s gaze stopped on the clone, his forehead creased with confusion this time. “Baby—” he began.

Lena tensed. Had she made a mistake? Why would the clone honor her wish? She’d always done the exact opposite.

But the other Lena looked at Kyle and pointed to the door.

“You heard her. Scoot. Girls need to talk.”