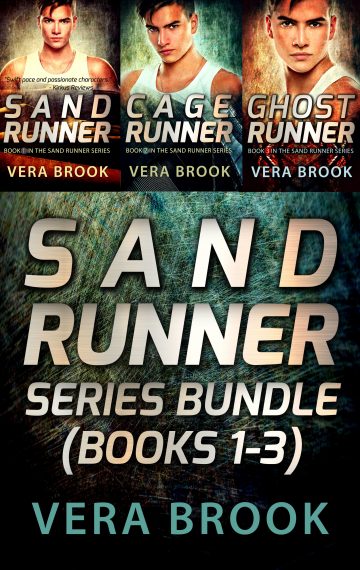 Binge read the first three books in the SAND RUNNER SERIES in one ebook bundle!

Welcome to the No Limits Race.

In the near future, 16-year-old Kaiden Reed makes a bold and dangerous decision to enter the most brutal sports competition on the planet. One in which he will undergo a radical upgrade and become a new kind of athlete and a new kind of hero.

All Kai wants is a shot at a better life and to impress the girl of his dreams. But the stakes in the Race are higher, and the choices tougher, than he ever imagined.

Does Kai have what it takes to compete? How far will he go to win? And should he trust the person who recruited him in the first place – or is she using him to carry out a bold and dangerous agenda of her own?

Kai has survived the No Limits Race, outsmarting the system and choosing to do what’s right rather than win at all costs. But his actions triggered events beyond his control, and now his enemies threaten both him and those he cares about.

When Emily disappears without warning, Kai sets out on a dangerous search for her across the lawless sectors of the megacity, forging new alliances and making new enemies along the way. But once again, Emily may have an agenda he knows nothing about, and one that will test both his courage and his loyalty.

Can Kai find the answers to his questions and save the person he loves before it’s too late?

Kai and Emily are reunited, but their fight is far from over – and so is their search for answers.

As the dangers mount and the stakes continue to rise, they will both confront their greatest fears and discover new things about themselves in the process.

Can they face their enemies and keep each other alive, and still stay true to themselves? What if some of the enemies are ghosts from their own past?