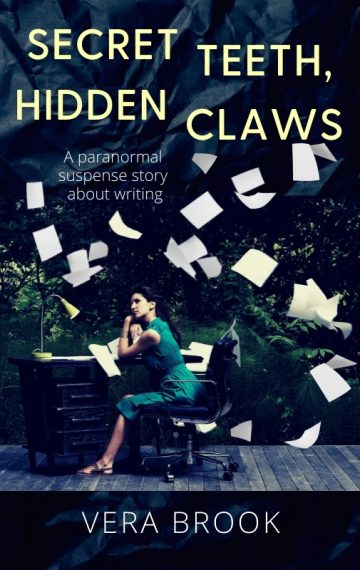 It’s a Friday in July, and Nora is the last person in the office, herding numbers into cells of a spreadsheet with numb fingers, the AC hissing at her back, when she feels it—a sudden pressure, then a stirring movement inside her chest, like rolling waves.

She’s on her feet at once, grabbing her bag and rushing out the door. She knows she doesn’t have much time.

She runs the five blocks to her apartment, her long skirt flapping around her knees and her sandaled feet beating the hot pavement. Her apartment is at the top of a spiral staircase on the third floor. As soon as she gets there, she locks the door and closes the blinds. Shuts off the phone and throws it in the closet.

Then she rushes to her desk and opens her laptop.

For a moment, the weight inside Nora’s chest is gone, and regret stings her throat.

No. Come back. Please.

She sits very still, staring into space, her hands over the keyboard. She barely dares to breathe. She waits.

She doesn’t have to wait long.

The thing writhes and thrashes inside her, stronger and more impatient now. A large bird trying to straighten its wings. Or maybe a dragon. Sharp teeth and claws scrape her ribs, and fire stings her throat. But her bruised heart races joyfully.

Words crowd the screen until they overflow, spilling on the desk and on the carpet, then scattering into the corners of the room like spiders. She doesn’t recognize any of them, doesn’t understand them, but that doesn’t matter. The only thing that matters is letting them out.

Her fingers bleed onto the keyboard, and her wrists, arms, and back turn to stone. Still, she keeps typing, enthralled. She cannot stop. She doesn’t want to.

The story is a monster inside her, willful, cruel, and marvelous. It thrashes, claws, and breathes fire, frantic to get out. And it keeps growing larger and stronger by the minute.

Nora cannot type fast enough. She can no longer feel her body or remember her name.

But she sees and hears other people, feels what they feel, recalls their memories. In a desert town slowly erased by sand, a young runner argues with a man who’s been like a father to him, about entering a race that might kill him. A scientist stays in her laboratory late into the night, searching the data for clues to her mother’s disappearance. At a bustling farm market, a girl bribes her little sister with ice-cream so they can spy on a bicycle thief.

The voice startles her. She never heard the door opening or the footsteps approaching.

Her lover Remy bends over her, concern in her eyes. “I called but there was no answer. Are you alright?”

The beast inside Nora shrinks back, resenting the intrusion, and terror grips her. She can’t be interrupted now.

“Leave me.” The voice is not her own. You’re not safe here, she wants to add but doesn’t. And: I’m sorry.

But that’s not how it works. The monster demands Nora’s full attention, her undivided loyalty.

The floor splits open and swallows her lover, then seals itself shut again. The door and windows blur and vanish as well.

Nora’s heart shatters, and the monsters devours the pieces. The pain is excruciating, but she’s almost glad. She can focus better without her heartbeat to distract her.

Now the dragon’s will surges through her like high voltage. She drops her hands on the keyboard, and the laptop pops and dies at her touch, the circuits burned. Flames leap from the keyboard onto her hands, licking her skin, burning words into it.

She tosses the laptop away, and grabs a notebook and a pen, desperate to keep going. But the pen cuts the paper like a knife, shredding the page into ribbons. Trembling, they rise in the air and swarm around her, sharp as razors. Every cut is a word.

She slips to her knees on the floor, desperate for a new surface to write on and something to write with—a pen, a knife, her own blood, anything.

The cat comes from nowhere. Or maybe it’s always been there. A gray-blue tabby, soundless and wise. She licks the writer’s hands and face, putting out the flames, healing the cuts.

But she’s out of time. She can no longer breathe. The story is choking her. It has to come out.

The writer raises her scared stone hands to her throat, and digs her fingernails in, ripping and tearing.

She claws through her skin, then her muscles, deeper and deeper into herself, her fingers slipping in the warm blood.

Until her throat splits open, and then her chest, and finally her whole body—and pages fly out.

There are hundreds of them, each covered with words.

They circle around the dying writer at a dizzying speed, rustling and whispering, filling the room from the floor to the ceiling.

And then, still in the air, they slow down and pull together, arrange themselves into a neat pile.

Below it on the floor, an empty, cooling husk that was the writer’s body crumbles and dries out like a snake skin. But it’s shrinking fast, and soon it’s gone.

The book sails down and lands on the empty desk.

It will lie there, perfectly still and apparently harmless, with its sharp teeth and vicious claws hidden.

Waiting for a reader.